Teacher in Space
Christa McAuliffe before the Tragedy 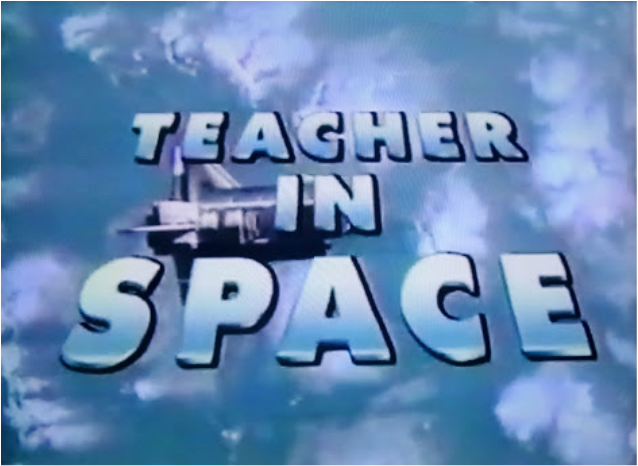 I recently came across a documentary on YouTube about Christa McAuliffe. She is, as you probably remember, the would be "Teacher in Space". What is unique about this documentary, is that it does not retell the story we all already know, about the Space Shuttle Challenger (mission STS-51-L) that launched on January 28th, 1986 but never reached it's destination. Instead, "Teacher in Space" was filmed and aired just before that fateful launch. It is a snapshot of swirling excitement and optimism in Reagan-era America in the time just before Christa would have been the first ordinary citizen in space. This film, narrated with a certain charm by Burgess Meredith, captures the infectious spirit of wonder surrounding not just the flight of one woman, but of the coming changes that it would usher in. The entire field of space exploration, this film would have us believe, will never be the same. We must prepare ourselves for a new space age where humans, more specifically Americans, would have a more commonplace presence in space. In a time of increased and humbling environmental awareness and nuclear unease, we saw space as solution to earthly problems. Space was a new, vast frontier with untapped potential and resources for the taking. But, if space is to be the new industrialized frontier, we would need thousands of qualified people, for years to come, to meet these new challenges. There was warranted concern as to whether America could produce such vast numbers of qualified, skilled workers. At the time of the documentary broadcast a paltry 6% of America's high school students were skilled in math and science, while in Japan, Germany, and the Soviet Union as many as 90% were skilled in these areas. Christa McAuliffe, as the first ordinary citizen in space, along with the Teacher in Space Program and the Young Astronauts Program were not just public relation stunts for NASA. It was an honest endeavor to inspire other teachers and ignite the imagination in students to get our American education system, as a whole, reaching for the stars in terms of academic achievement and personal potential.

Christa McAuliffe was an ordinary citizen, a high school social studies teacher from New Hampshire. She decided on a moon shot to answer the call made by President Ronald Reagan, when he announced in August of 1984 a plan to put one of America's finest into space, a teacher. Christa's application was joined by more than 10,000 others. She said later that even though her chances were slim, it could inspire others not to be afraid of failure. 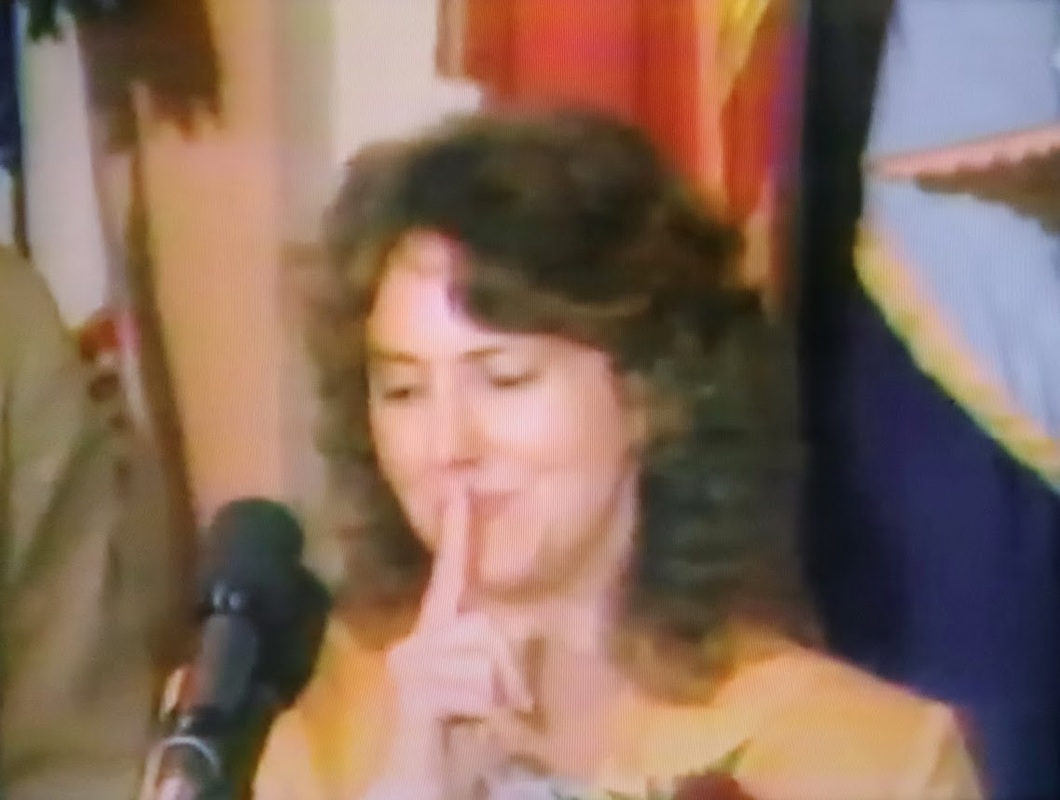 Of the more than 10,000 applicants, that number was cut to 114, then ultimately 10 finalists were invited to spend two weeks at Johnson Space Center in Houston. Christa had apparently made some great friends among those fellow teachers and would be explorers. On July, 19th, 1985 Vice President George Bush announced first the runner up who will make the historic flight if the winner cannot. Barbara Morgan was that runner up, an elementary school teacher from Idaho. Then, finally, he announced the name of the first private citizen passenger in the history of space flight, a teacher with the "right stuff" Christa McCauliffe.  Christa became visibly emotional during her brief but poignant speech, she spoke of the incredible bonds she forged with her fellow teachers that she spent two whirlwind weeks with at Johnson Space Center. "I've made nine wonderful friends over the last two weeks and when that shuttle goes", her voice cracks and she takes a second to compose, "there might be one body, but there's going to be ten souls that I'm taking with me". 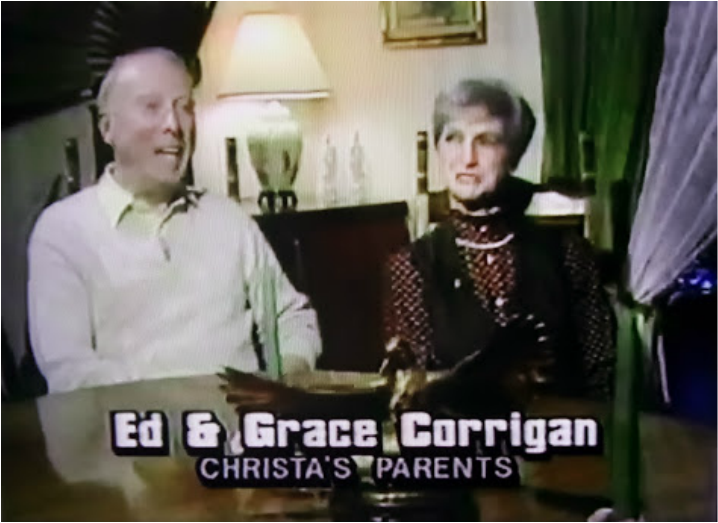 The documentary gives us a brief, idealized picture of her childhood and we meet her parents Ed and Grace Corrigan. Ed, the proud father, boasts of Christa's selection as "queen of the play" in kindergarten. "That's when she started to be singled out a bit" Christa was the eldest of five children. Ed goes on to say that although she has gone way past her siblings in terms of success they are all special and successful in their own ways. Christa met her future husband Steven McAuliffe as high school sweethearts. Christa volunteered to attend the local college to lessen the financial burden on her parents who still had four other children to send to school. There, she soon set her sights on becoming a history teacher. 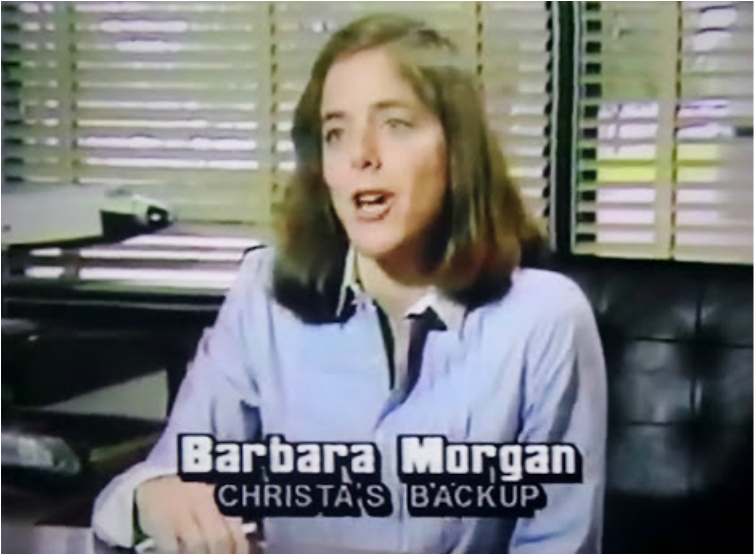 Barbara Morgan, the runner up, will go through the same training as Christa. She will also serve in a ground support roll during the launch. It became necessary for Barbara to take over as NASA ambassador and the scheduled lecture circuit in 1986 after Christa's death. She then returned to the classroom. Not losing sight of her celestial aspirations, in 1998 she became a full time NASA employee and eventually in 2007 she did finally venture into space on mission STS-118. Why then in a group of nine other exceptional teachers like Barbara Morgan was Christa McAuliffe chosen? According to Ann Brady who was largely in charge of the selection process, they chose Christa because she was a skilled communicator "she is a sincere, instantly likable person" who Ann believed truly wanted to have an impact on education. 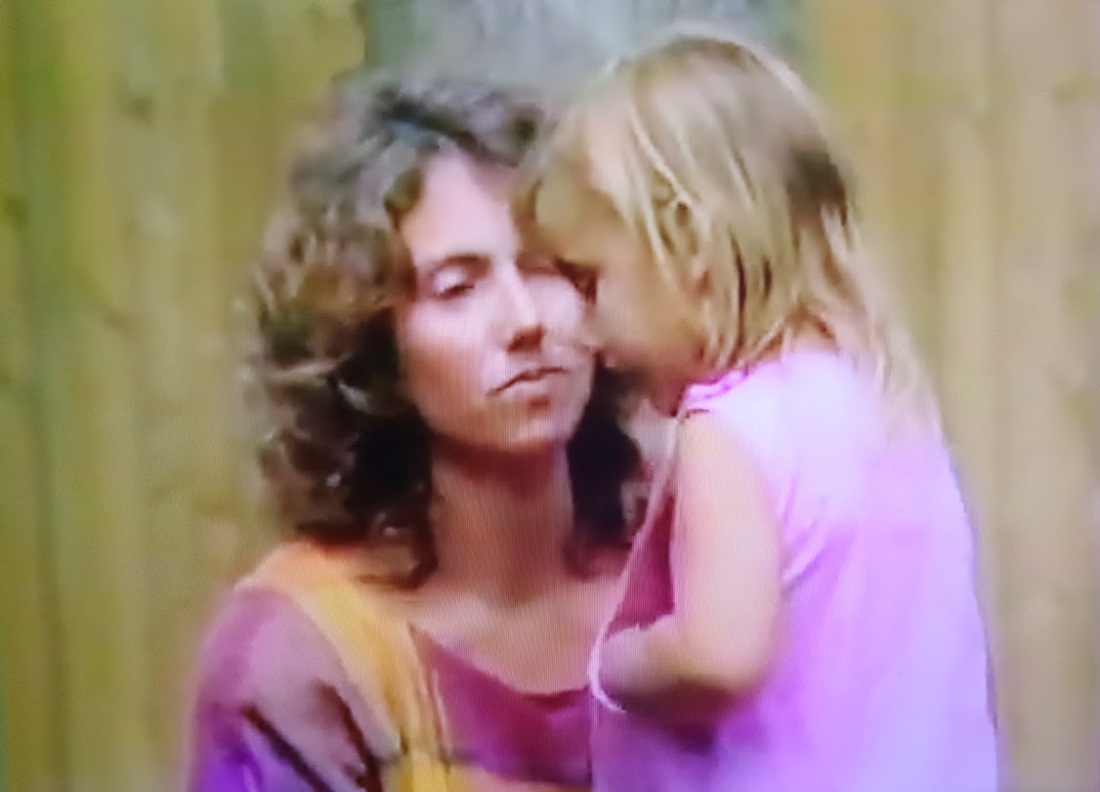 "I've got a very sad little girl" says Christa on Sunday, September 8th. It is day she will leave her daughter Caroline, 6 and son Scott, 9 to begin her year long training with NASA. It was the last available flight to Houston so she could have as much time as possible with her her family. 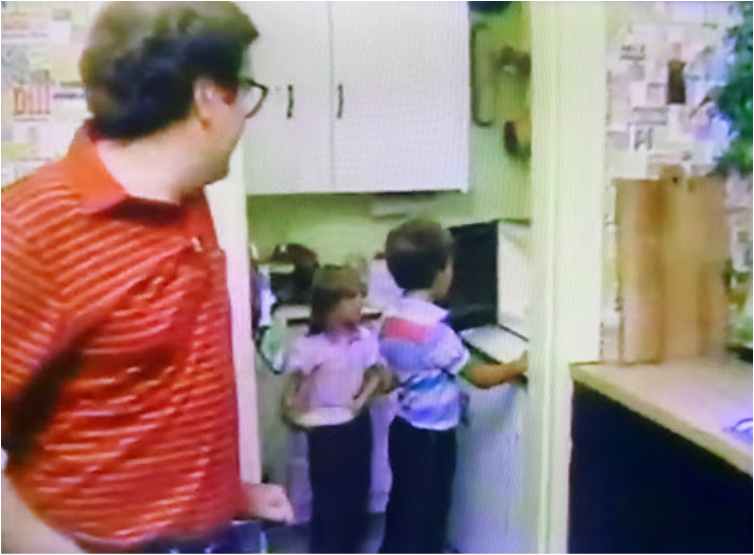 This is Steven McAuliffe, at home in New Hampshire after Christa's training has begun. "We miss her terribly, it's a very different house without her". He compared his situation to the 1983 film "Mr. Mom" which would (in 1986) still be in America's consciousness. He gripes good spiritedly about choosing clothes in the morning and frozen dinners. He is excited about Christa's opportunity to be the first civilian and teacher in space but wants her back home. He realizes, says the narrator, that she will soon be back and hopes that when she returns to earth the house goes back to normal. "My biggest fear is that I (have been reprogrammed) and will continue to do these chores I've avoided for 15 years" says Steven. This documentary does not acknowledge any fears Steven or anyone might have had about the risks or possibility of an accident. 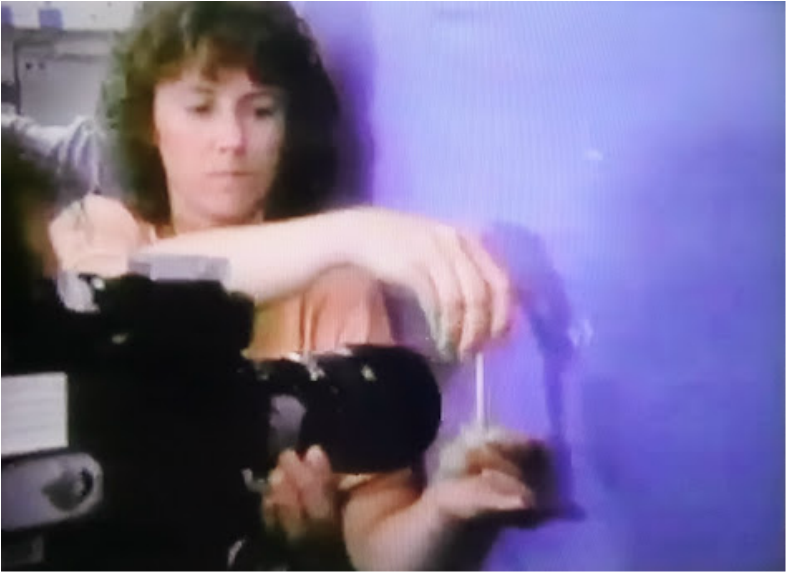 Christa was to broadcast two experiments live from the shuttle to be shown in schools throughout the nation. The first of the two was called the ultimate field trip, which was how Christa often described her spacebound adventure. This was part of the Teacher in Space program which was more than Christa, it became a network of teachers starting with the nine fellow teacher finalists. They received special training and along with the Young Astronauts Program these teachers formed an exciting partnership between NASA and the nation's school system. 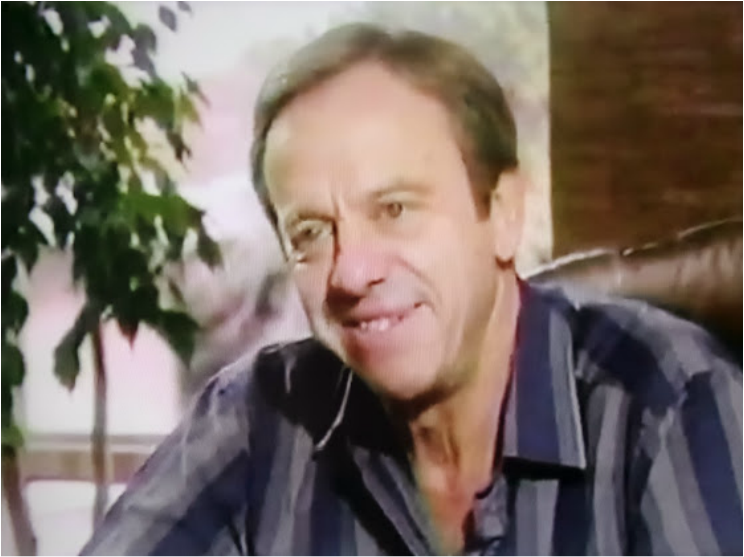 Alan Shepard, the first american in space, insists space is about to become part of everyday life. He envisions that in twenty years people will casually spend their weekends in space. This optimism, no doubt, was encouraged by news of small scale colonization. On January 25th, 1984 Ronald Reagan announced plans for a full-time manned space station to be in orbit within the decade. This was to be space station Freedom which never materialized, although allot of engineering, research, and development was done including CAD simulations. A chapter of the Young Astronauts visited the Ames Research Center while there, Phil Herth, the tour guide was telling young students that as a result of this landmark first civilian in space, by the time they were at the age to start their professional careers it will be allot easier to go into space. "An astronomer, for example", says Mr. Herth "would be able to observe or conduct experiments from space". That would have been the mid-nineties and even now ventures into space are not common, although there are several private enterprises just now attempting to advance the field of space tourism. 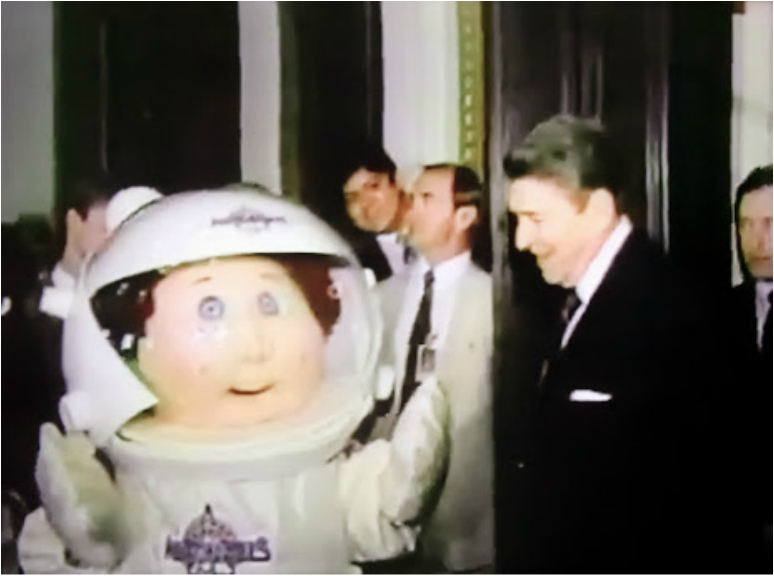 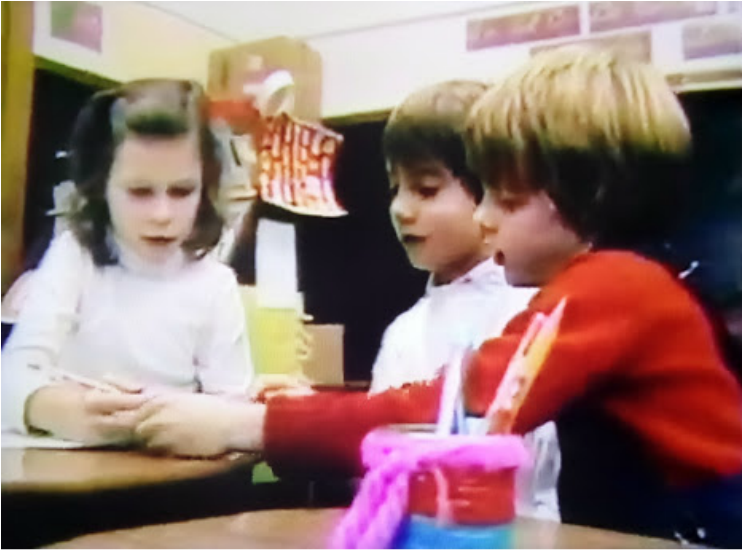 The launch is just days away at this pictured moment in time and at Kimbal Elementary school a chapter of Young Astronauts, including Christa's son Scott and his classmates, are gearing up to watch Christa head to space in the Shuttle Challenger. 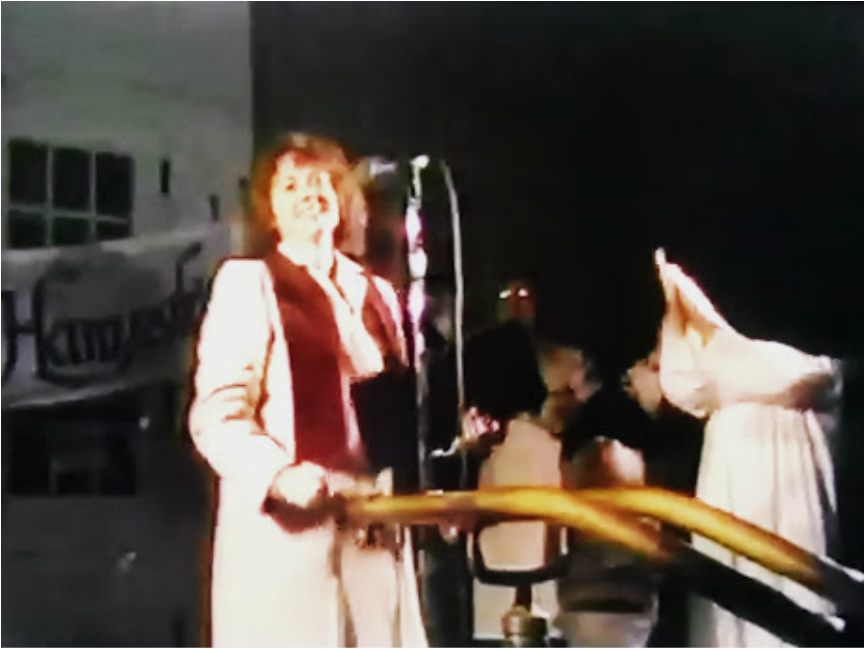 Christa receives a heroes welcome in scenes accompanied by Bruce Springsteen's "My Hometown". She inspired teachers and gave them reason to be proud in a profession that is often thankless. Students are inspired too as one declares "I want to be an astronaut because of Christa McAuliffe".  It's New Years in Concord New Hampshire, and as excited as the nation was for Christa's adventure, this small town was even more so. 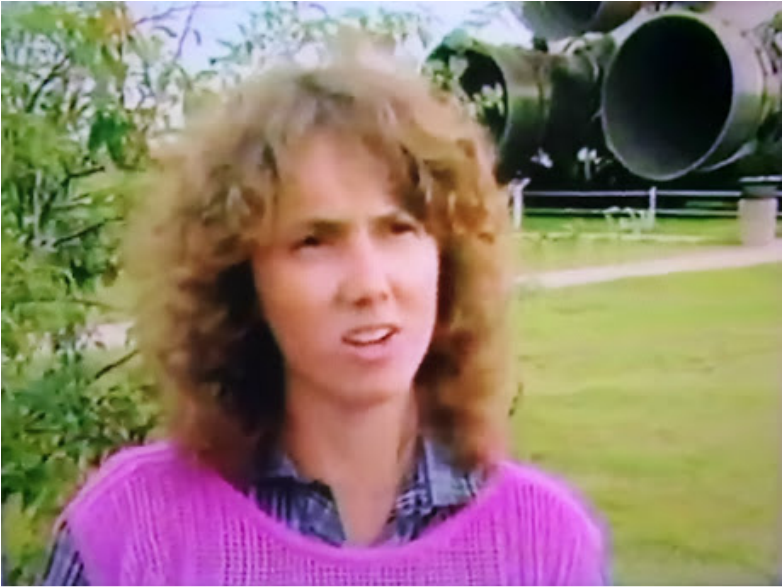 In many ways the bulk of Christa's mission was meant to begin after she returned from her timeless flight with a lecture circuit that would have started in March 1986. Christa "hoped that looking at the world as a unit" could help people of all nations realize our fragility and endeavor to "work together". Christa vowed to return to her high school classroom after the flight and lecture tour with her now bittersweet words she stated: "The Teacher in Space Program would lose an awful lot if the teacher never returned to the classroom." "There are things I see in a classroom that makes me wanna cry because kids set such low limits for themselves". "Its something I would never say to a student, don't dream, dreaming is OK". And although she never did return to the classroom her impact on education still echoes. Today, in many ways her legacy lives on, in history's narrative telling of an ordinary citizen daring to do the extraordinary, in the schools and scholarships that bare her name, in the Congressional Medal of Honor she won after her death, and a memorial, at her grave site in Concord, New Hampshire, where people still leave apples and pencils. Her memorial recalls Christa as a Mother, Teacher, Pioneer Woman, Crew Member Space Shuttle Challenger, and The first ordinary citizen to venture toward space. It also reads: "she helped people. She laughed. She loved and is loved. She appreciated the world's natural beauty. She was curious and sought to learn who we are and what the universe is about. She relied on her own judgement and moral courage to do right. She cared about the suffering of her fellow man. She tried to protect our spaceship earth. She taught her children to do the same".  The same night of the fateful launch President Reagan would have given his State of the Union, instead he addressed a grieving nation: "The crew of the space shuttle challenger honored us by the manner in which they lived their lives. we will never forget them, nor the last time we saw them, this morning as they prepared for the journey and waved goodbye and slipped the surly bonds of Earth, to touch the face of God".
home