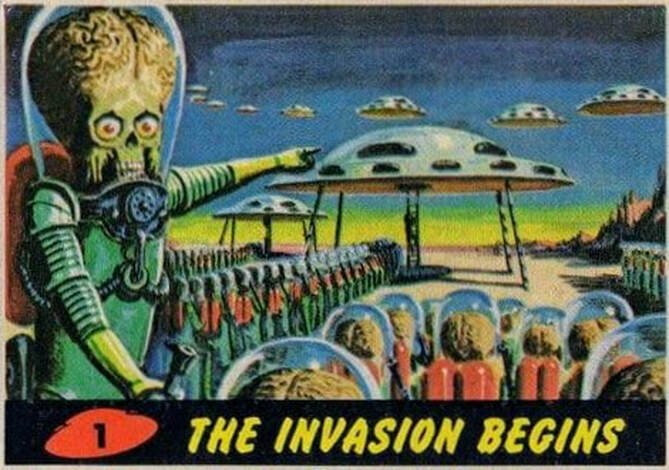 Mars Attacks is probably best know as the stylish yet underwhelming 1996 Tim Burton film (Mars Attacks!). What many don't know is that the film is actually based on a series of trading cards from Topps released back in 1962. Very collectable and somewhat infamous, these cards have achieved cult status today. The Mars Attacks trading cards featured a simple but compelling science fiction horror story that was bolstered by lush yet grim artwork. Designed by Wallace Wood and Norman Saunders the imagery depicted (often in graphic detail) an invasion and human extermination campaign by Martian beings in a desperate search for a new home. While the 1996 Tim Burton film is a comedy spoof, the 1962 trading cards tell the story in a deadpan manner. In fact the text on the cards read like news reels and brings to mind 1938 War of the Worlds "news" broadcast. 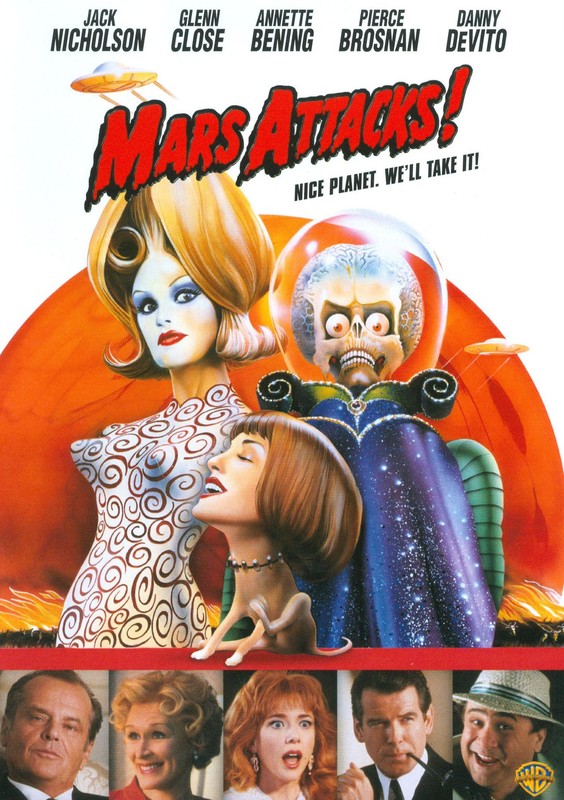 While its clear Tim Burton was inspired by the original source, the film is decidedly a comedy. I would have preferred a film adaptation that was more campy horror in the vein of a Paul Verhoven film. One could guess that the 1997 film Starship Troopers may have been influenced by Mars Attacks 1962 with all of the giant insect carnage. In fact, the name Starship Troopers originated in a 1959 science fiction book about fascism and contained no giant bugs. But I digress, back to Mars Attacks, in my opinion the movie suffers from not being very funny while turning its back on the horror elements of the original material and therefore not being very scary. 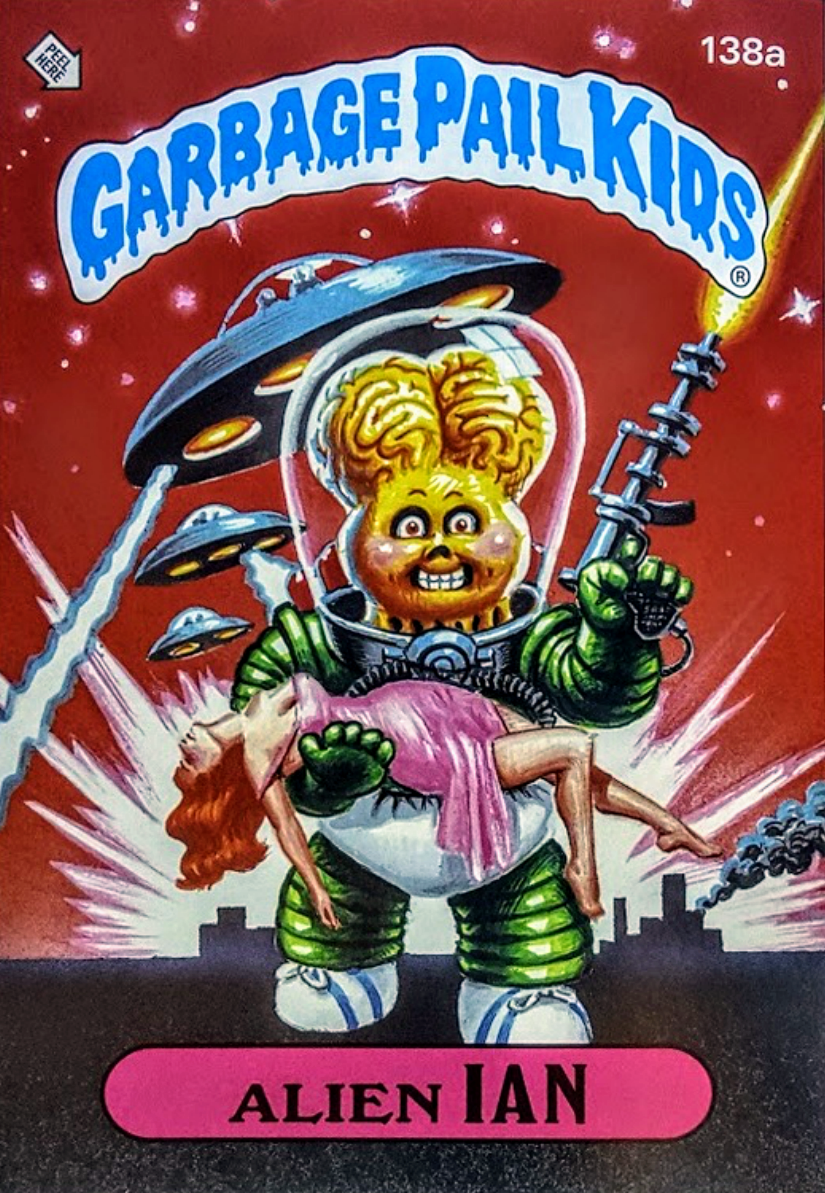 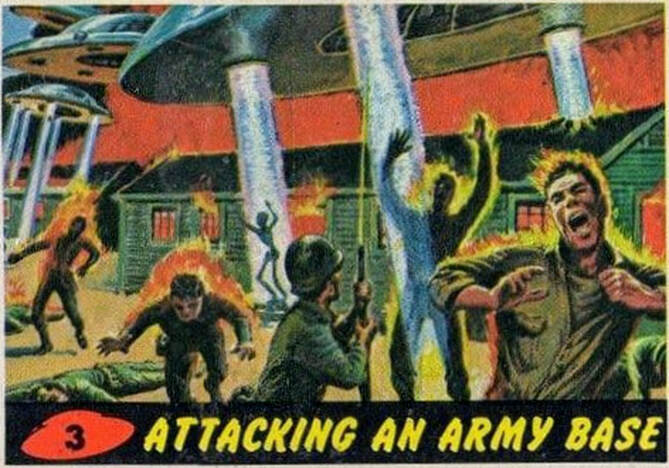 The story begins with a surprise attack on an Army base. Where these unsuspecting soldiers become vaporized by technology the likes of which they've never even imagined. 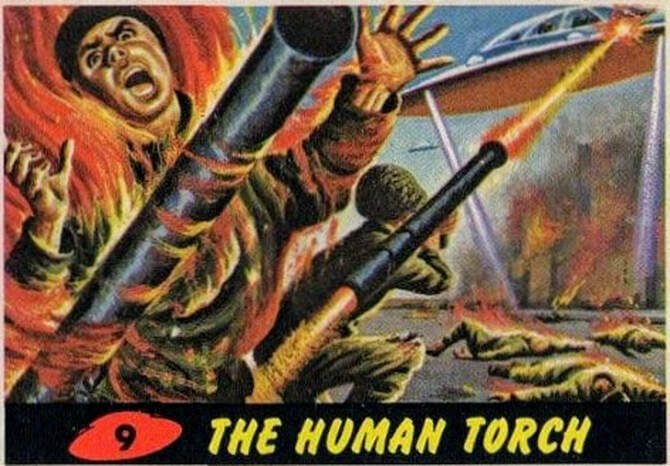 As cities and landmarks fall, surviving civilians go into hiding while our military tries, mostly in vain, to defend our world. This card titled the "Human Torch" was an example of the graphic scenes of death that upset and drew complaints from many parents in 1962. Though very popular, Topps had to give Mars Attacks a short run due to this public outcry questioning the decency and appropriateness for children. 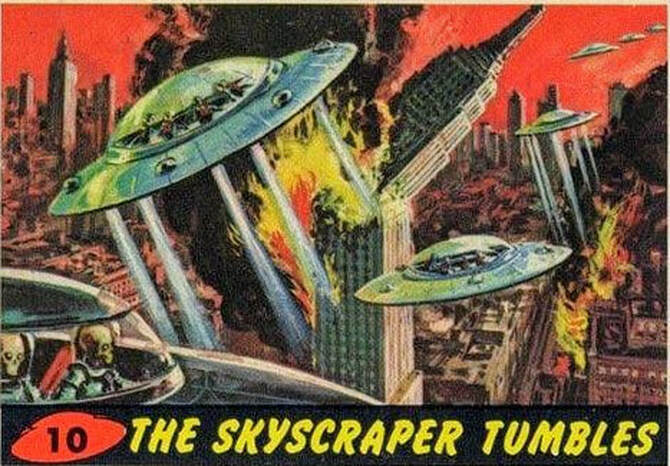 The Empire State building tumbles! The card's reverse side text tells us that the attack occurred just as the working day had ended while thousands were still inside about to head home to their families. A detail of the cold and calculating maneuvers of the Martians. 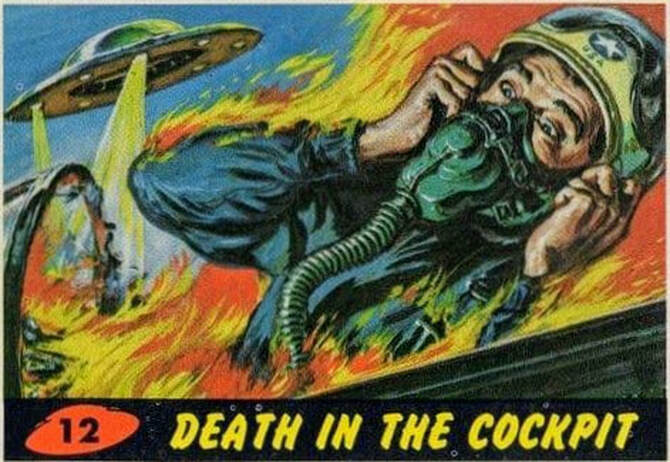 More fiery death at the hands of the Martians is depicted as this US army pilot bravely tried to follow an alien ship to determine their hidden base of operations on Earth. 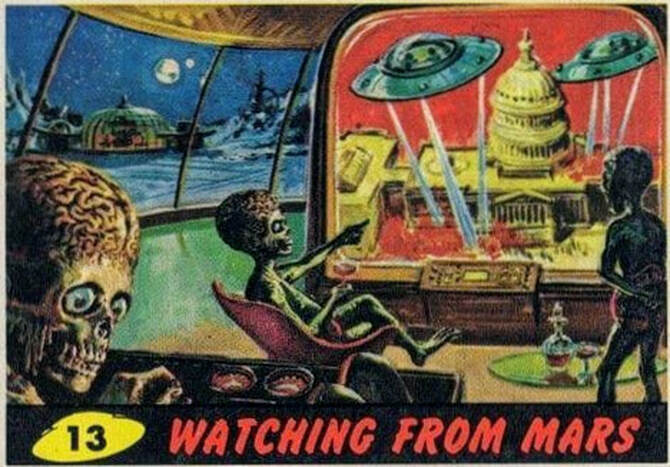 The Martians toast to what seems to be a successful invasion. The attack has spread from the United States to the world as both China and the British Parliament have been besieged. 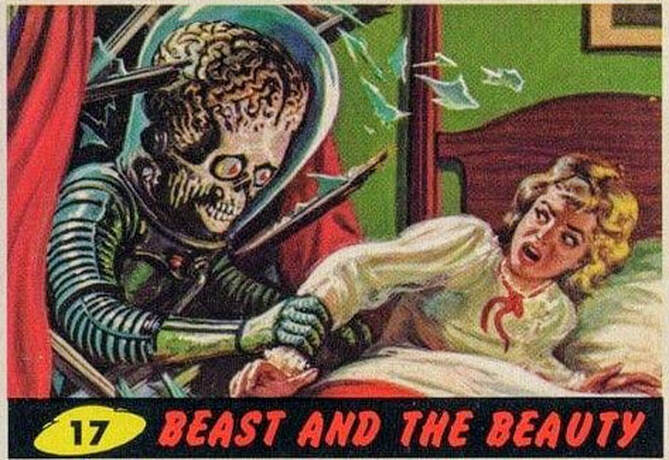 Aside from toppling buildings and blowing up military bases the aliens had a substantial ground offense as well. Traveling from block to block these creatures flushed out humans in hiding. Here we see a small scale attack where the invaders come in the middle of the night shattering the illusion of the safety of your own bed. 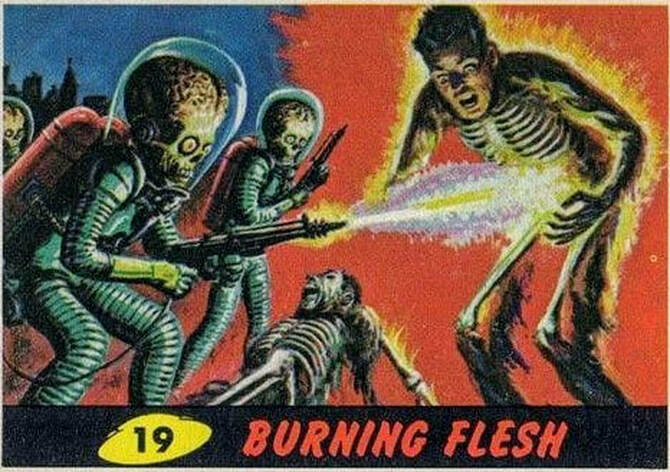 More gore as the Martians use their atomic ray guns on any unfortunate earthling they cross. 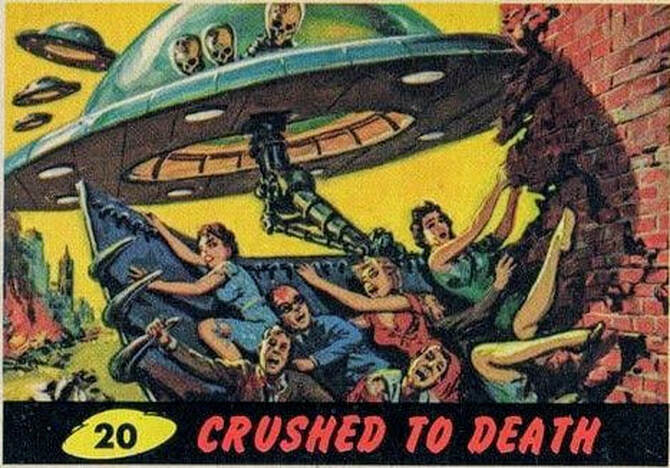 The Martians exhibited cruel ingenuity in finding sadistic ways to kill. Aside from the burning atomic ray, the martians utilized freezing rays, shrink rays, and even crushing people like insects with giant shovels used to clear the massive wreckage from the streets of their new home. 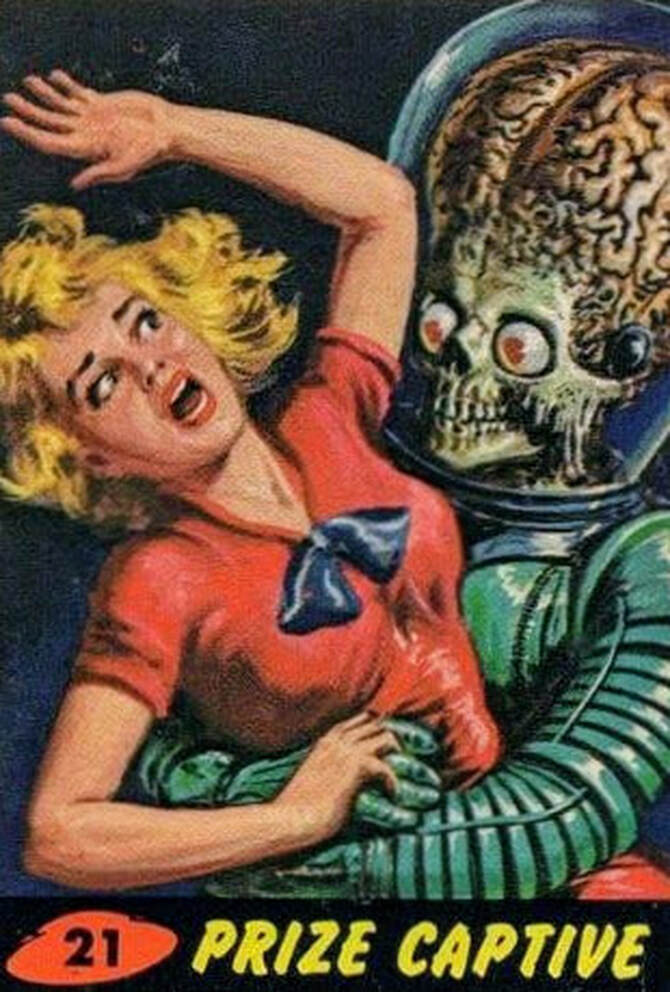 Despite this card's title, the text tells us that in an extremely brutal fictional world, this woman mercifully manages to escape. 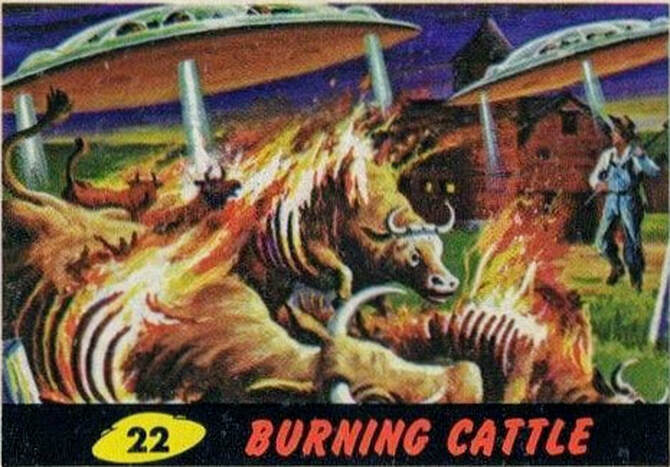 The 1996 Tim Burton film opens with a similar scene, this herd of flaming cattle was meant to show the aliens were interested in destroying our food supply. 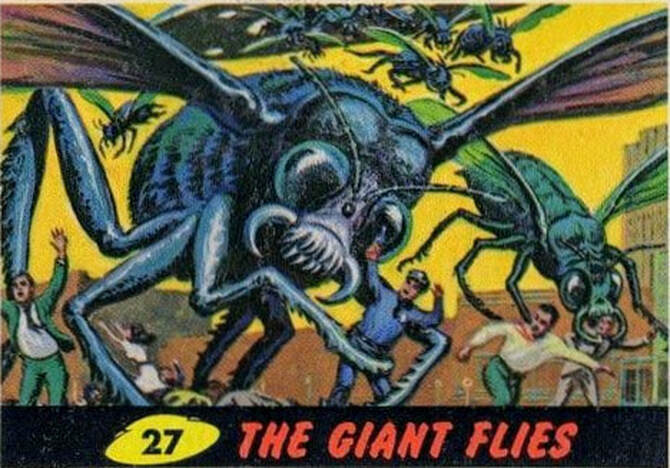 The Martian invaders find new and horrifying ways to subjugate the humans. They unleash giant bugs to seek out and consume humans that may be hiding or fleeing. Here the flies appear to be dropped, full size, from the alien saucers. According to the text these insects are 500 times their normal size. In this scene of panic a police officer had drawn his pistol in a desperate final act that appears to have come to late. 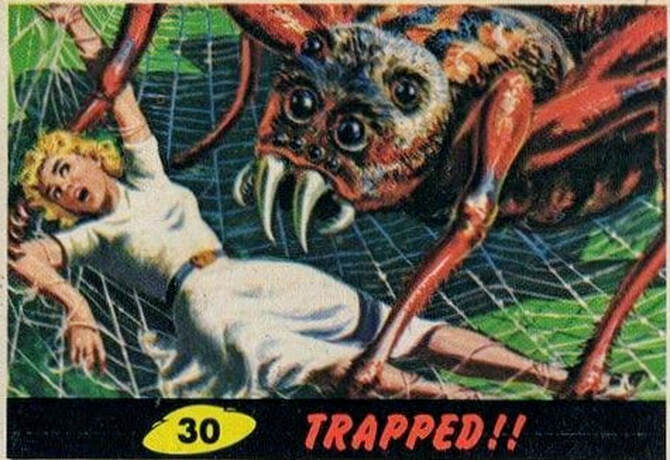 At this point of the series the narrative changes focus from the alien invaders to the onslaught of giant bugs that the aliens engineered and released. A substantial block of the story and images are depicting giant insect attacks, as if the story veers to another property. We see various insects attacking people in their hideouts, giant ants attacking trains, insects destroying power lines, scenes of Army helicopters shooting winged beasts, even a caterpillar eating the Eiffel Tower in Paris. Again and again are images of bugs seconds from biting a poor defenseless humans head off. It does get a little repetitive and the art showing the insects is not quite anatomical, we see generic versions of bugs here. 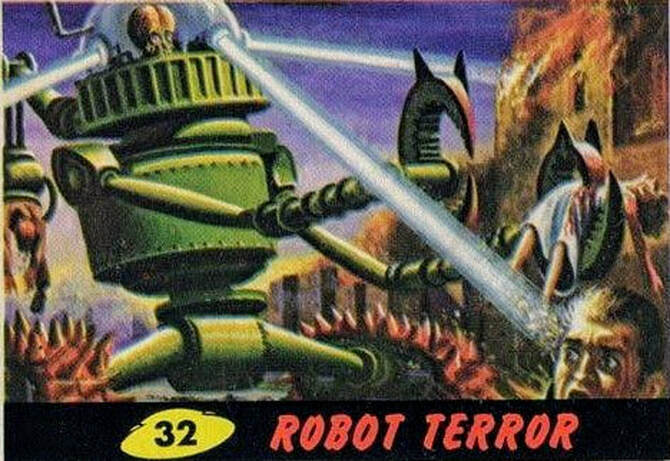 Aside from the giant bugs and atomic ray guns it is clear the Martians spared no expense or creativity when it came to allocating new and terrible ways to eliminate the human pests. Although I have characterized the imagery as graphic, there is generally not a lot of blood shown, this unfortunate woman who was impaled by the robot's giant claws would be an exception. 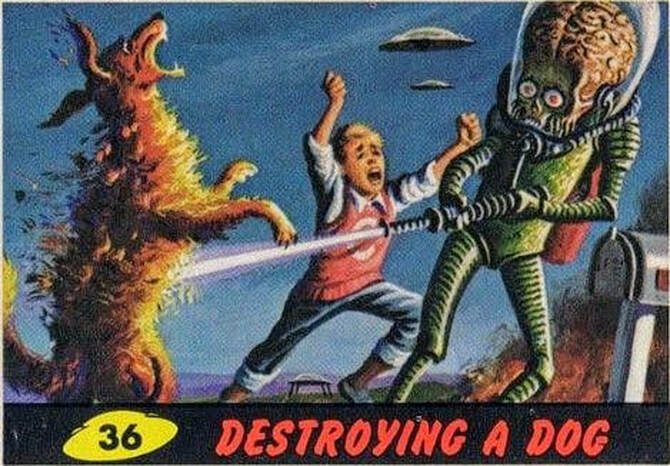 Though visually restrained this depiction of a Martian killing this little boy's dog probably added to the chorus of parents who didn't see these collector cards as appropriate for children. 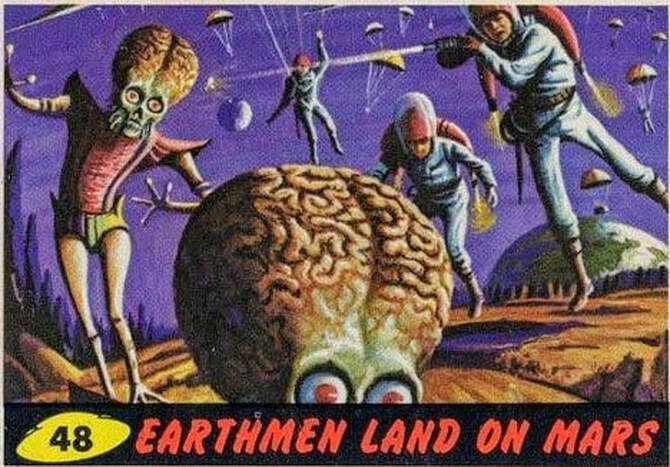 The tide starts to turn as the Earthmen execute a scout mission on Mars by parachuting from their ship, filled with entire armies including tanks and other heavy artillery. 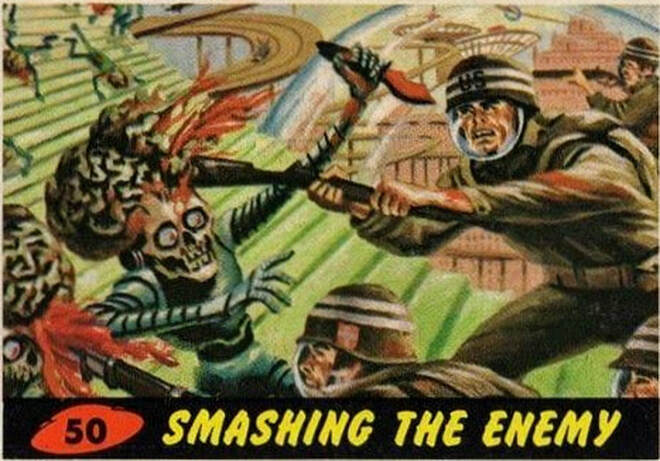 Apparently the Martians sent all their Ray Guns to Earth because here this human isn't even firing his gun he's wielding it like a sledgehammer at this seemingly defenseless Martian. I wont give away the ending except to say that Earth remains ours to destroy on another day. 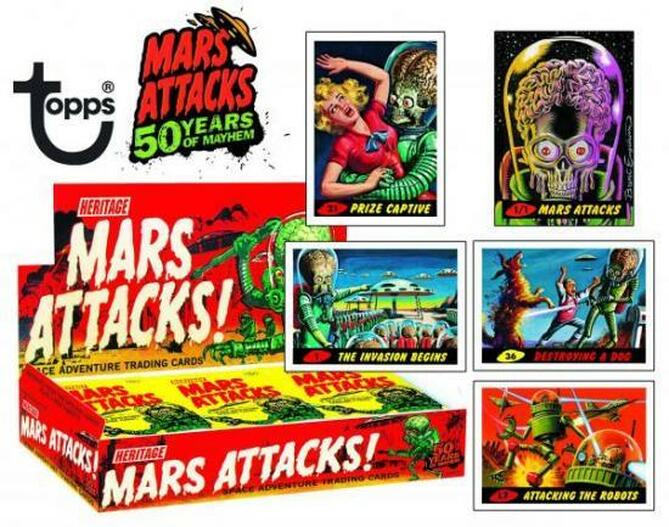 The original 1962 fifty-five card card set is extremely collectable and therefore elusive and expensive to obtain. Thankfully, Topps had the good sense to re-released Mars Attacks a few times due to the demand. In 1994, perhaps in anticipation of the movie, the series were re-released with bonus material including over the top new cards that amped up the gore and misogyny quite a bit. You can see some examples below. In 2012, Topps released the Mars Attacks Heritage edition that also included some bonus material but not the 1994 additions. The Heritage edition is still available today, and at quite a reasonable price, especially compared to the exorbitant prices the collectable originals demand. 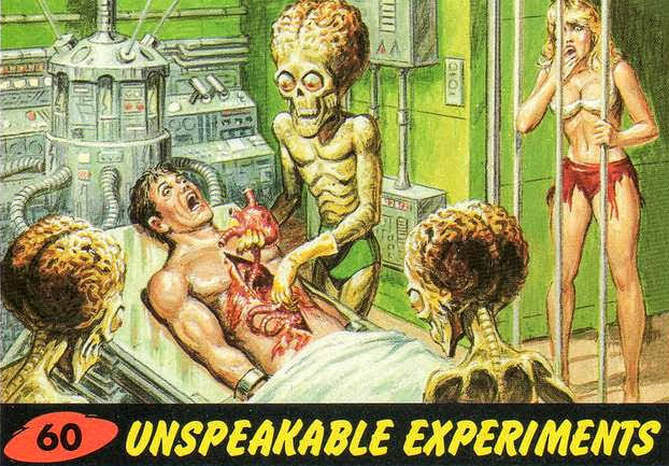 Not sure what hypothesis is being tested here. 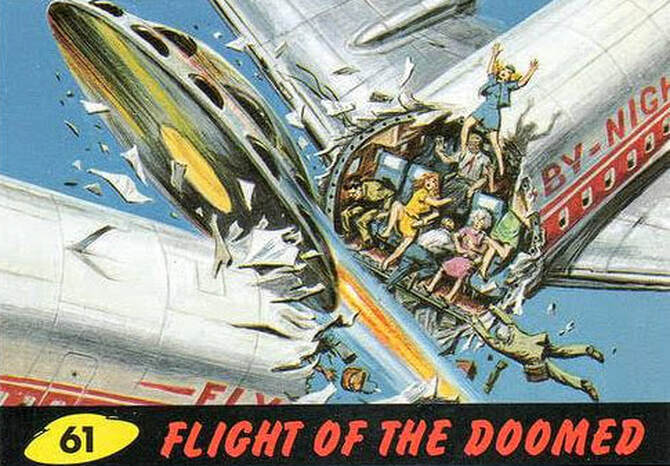 It has been established earlier in the story that the Martian saucers can smash right though our jets without any harm to the alien crafts, here it is again on a commercial scale. Though, if you book a trip on FLY-BY-NIGHT Airlines you are just asking for trouble. 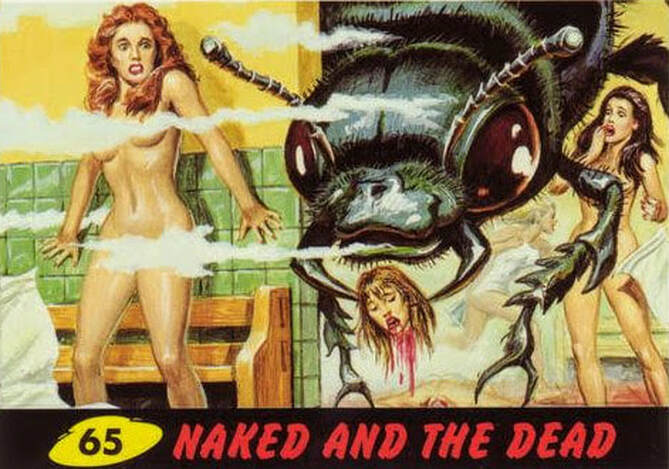 The 1994 artwork tries to emulate the original style, and does a fair job, but could you imagine if this card was included in the 1962 version intended for children to collect and trade? 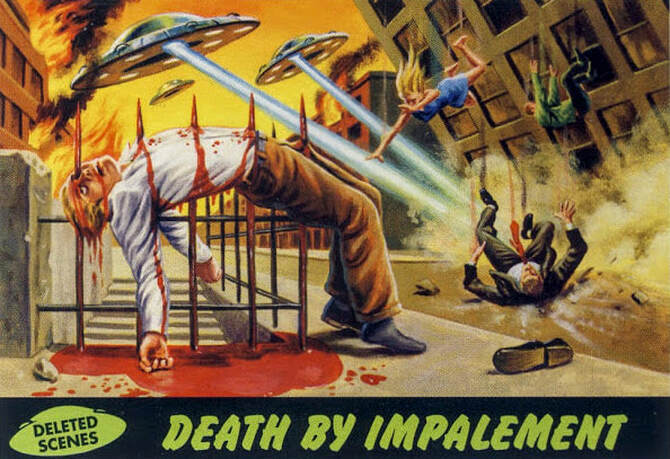 Apparently this was too graphic for even the 1994 collection, so it became a deleted scene.

Well, there you have it, a brief look at the imaginative and somewhat disturbing series of collector cards that in spite of inspiring a major motion picture continues to take on a life of its own as a pop culture icon.
You may also enjoy... 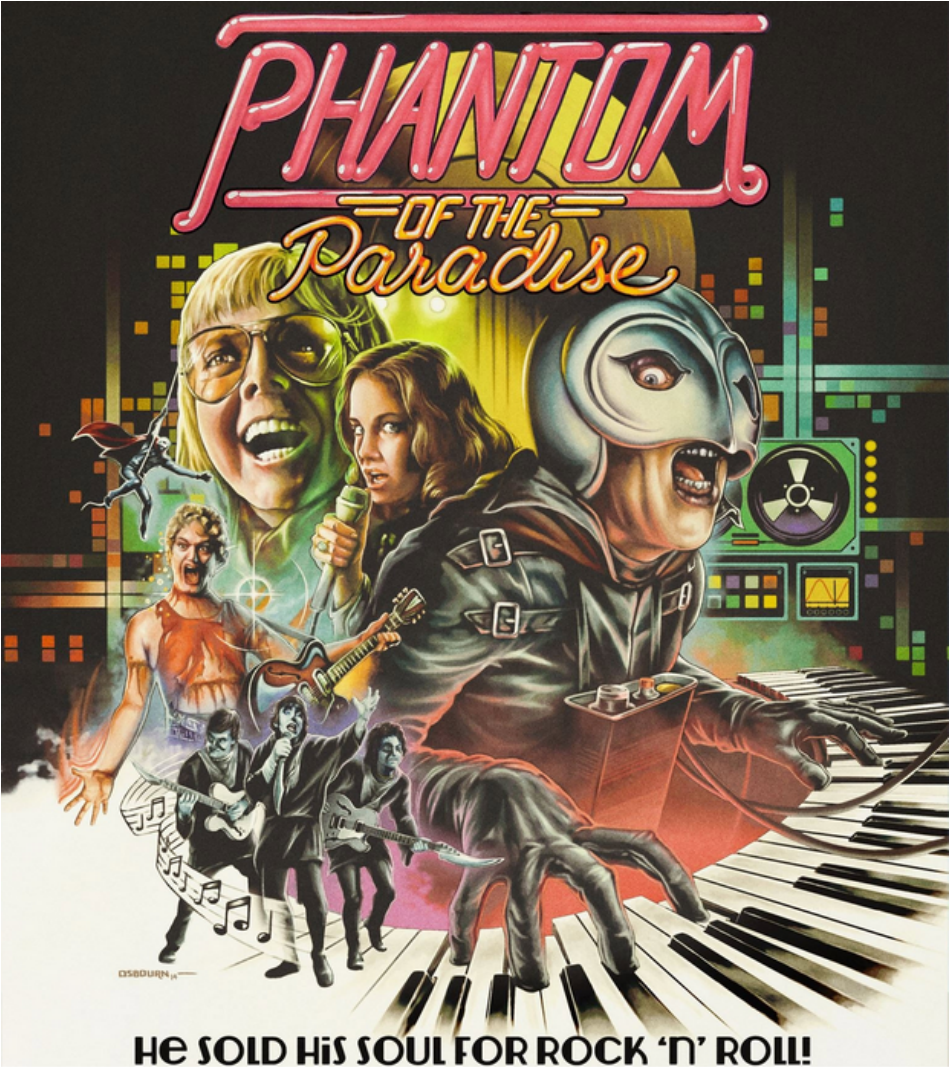 Strange Cinema is a poptechmotive series where we will take a brief look at movies that are in some way odd or unusual, films that may not reside within the mainstream consciousness. These may be obscure or overlooked films, sometimes dark, sometimes whimsical, either way this series is meant to shine a light on something you might not have known about before. In this first installment of Strange Cinema we will take a look at a movie that is certainly strange. It is a hard-to-categorize satirical and literary rock opera written and directed by Brian De Palma. His movies include Carrie (one of my favorite horror movies ever), Scarface, Sisters, The Fury, The Untouchables, and Carlito's Way to name a few. I discovered this movie's existence after experiencing Dario Argento's brilliant horror masterpiece Suspiria and was taken with the lovely Jessica Harper. She played the main protagonist in that colorful and violent acid trip of a horror film about a young dancer who becomes menaced by witchcraft at a secluded dance school. After seeing her in that movie I wondered what else she might have done. It was then that I discovered "The Evictors" (1979), a film about a young couple that had just bought a house, ignorant of it's violent past. And finally I discovered she was in a movie called Phantom of the Paradise. I was intrigued because Jessica Harper was singing in this film. Learning that it was written and directed by Brian De Palma (whom I respected) and featured music by Paul Williams (whom I saw constantly on television growing up but never really knew what he was famous for) solidified my resolve to seek out this elusive motion picture.
MORE
poptechmotive HOME