Almost immediately after the sixth generation 2016 Chevrolet Camaro's reveal in Detroit we were told by Chevy to expect a "visualizer" to hit Chevy's website soon. This Visualizer is similar the the "build and price" feature common to car websites but is meant to showcase instead, accessory options for the car. There is no pricing calculator here. Well, the Visualizer has launched, and it does show the vehicle's color choices as well as wheel options, ground effects and some stripe packages. The visualizer allows you to tweak the car then see it in (only) four views from the exterior and two views on the interior. This setup was somewhat underwhelming and left me longing for the full 360 degree view that used to be commonplace. Here we see a Hyper Blue Camaro SS with ground effects, 20" split spoke polished wheels and a white side spear stripe. 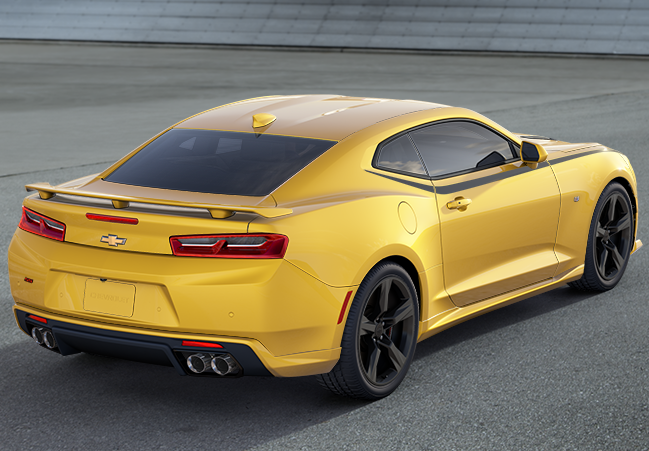 A sinister looking Black Camaro SS with ground effects, 20" Gloss Black 5 spoke wheels with a red outline, and a red side spear stripe.

I like the clean look of this Red Hot Camaro RS with optional 20" split spoke polished wheels. 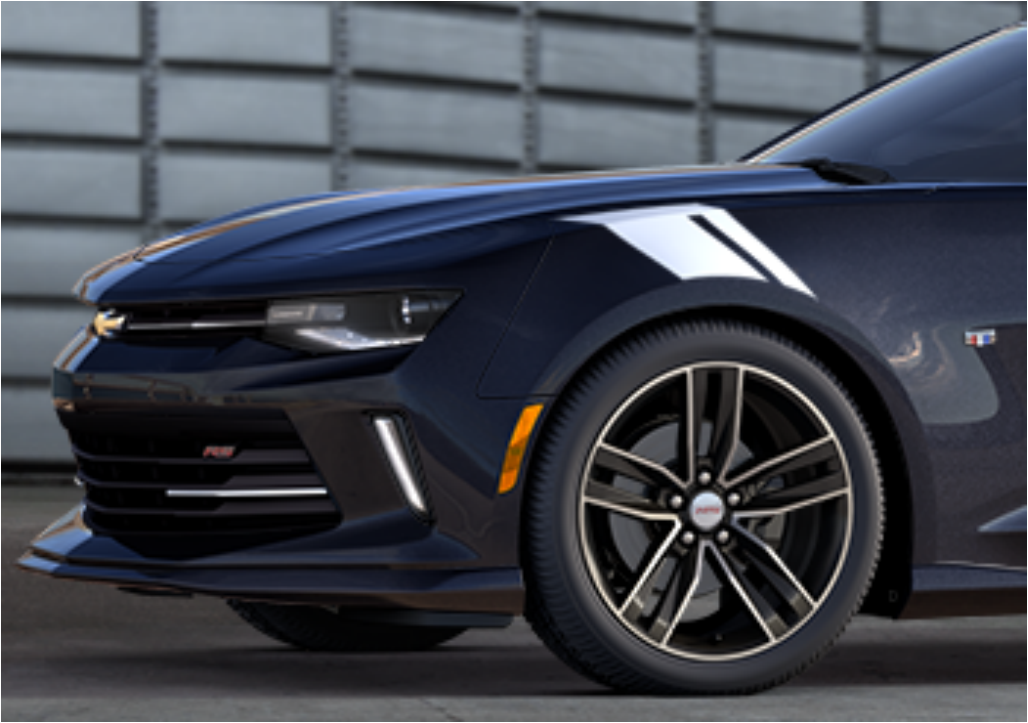 On the darker end of the color choice spectrum is this dark blue called Blue Ray Metallic. This Camaro RS is fitted with ground effects and white fender hash decals. The wheels are 20" grey premium painted with a machined face. Note the optional RS specific center caps. 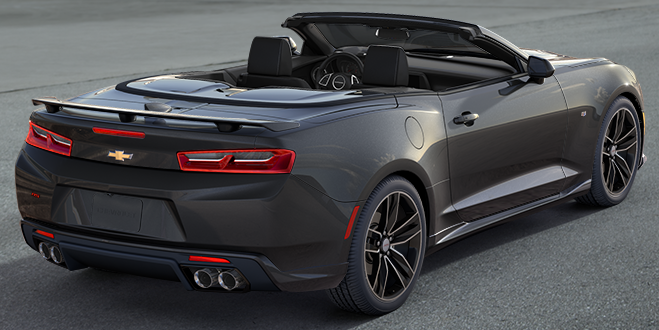 This Camaro SS convertible in Nightfall Grey almost looks like a special edition when paired with these 20" grey and machined face wheels.

The "black package"  features split spoke low gloss black wheels an black ground effects as well as black side view mirrors and blade spoiler. There is no pricing information available at this time. 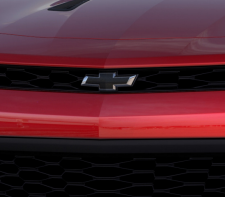 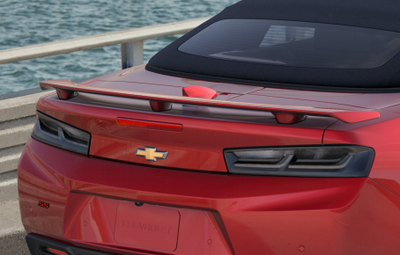 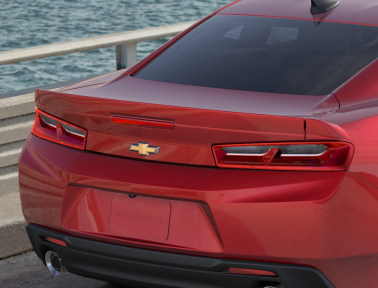 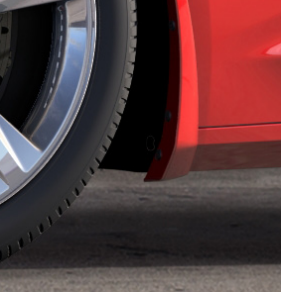 Chevy is offering a black-out Bowtie from the factory, as well as dark tinted taillights. The Blade Spoiler is bound to be a popular option recalling styling of the 3rd generation Camaro. Splash guards were available on the current generation Camaro and are back for the 2016. Meant to protect the body from mud and stone chips, lets hope these are better integrated into the cars design then the last ones. Not shown is the illuminated Chevy Bowtie that looks standard but glows with white led at night. 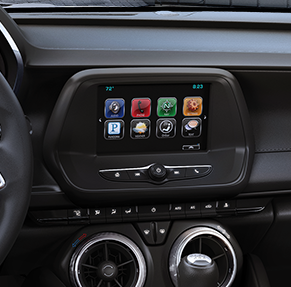 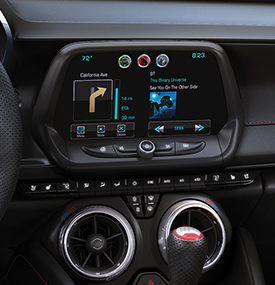 This visualizer gives us our first look at the base model infotainment system. You can see the one on the left has a large 8" screen and a nice chrome dial. The one on the right is the standard version and has a 7" screen and no chrome trim on the dial.

Even though this is the base fabric interior, it still looks quite upscale in this light grey.

The Ceramic White leather interior looks very exclusive and may be a nod to white Camaro interiors of the past.

Adrenaline Red leather is bound to be a popular choice. To the disappointment of some, at this time, it is not available for all exterior colors.

The base black cloth interior can be dressed up with this door accent trim. These will also be available in blue, yellow, and white. These are a good consolation prize for owners who do not have the color changing LED ambient lighting in this area.

An interesting interior option is the the available knee pads in Ceramic White. I was surprised to see these were available separately and can be used to add color and the richness of leather.

The Kalahari knee pads add some visual interest to a sea of black in this base interior.

Here we see the Adrenaline Red knee pads used in conjunction with the full leather interior. This gives the interior an upscale exotic look.

Overall this Visualizer has some great stuff. I was disappointed with a few aspects though. First of all, it would have been nice if the exterior was rendered as a full, fluid, 360 degree rotation as we have seen in the past. I also would have liked to have the blade spoiler and the dark tinted taillights integrated into the Visualizer. Plainly stated, there are alot more accessories, like hood striping packages, and illuminated door sill plates that aren't even shown here. It is possible that this is an early version and a new, better conceived, Visualizer is on the way. At any rate, if you want to customize a Camaro of your very own, head over to Chevy's website to check it out.
home
YOU MAY ALSO LIKE...

When I first heard about Local Motors in 2007 I was skeptical, skeptical that an emerging company that specialized in low volume high priced automobiles through an innovative business model centered around open sourced designs could find success with such a microscopic niche. Then I saw the car and became even more skeptical. The car resembled at first glance a Mitsubishi Eclipse-esqe pseudo sports car attached to a Jeep chassis. The Rally Fighter was designed to be the ultimate off road beast. I immediately dismissed it as outlandish and silly. And it was, at just under 100 thousand dollars it seemed even more ridiculous to me. As I stated, the car came out in 2007 and is still around, squashing my initial skepticism and replacing it slowly, with admiration. Over time I have grown fond of this odd yet historic car. The Rally Fighter is perhaps named so because it combines rally car capabilities with fighter jet purpose and aggression. The greenhouse of this car is even reminiscent of a fighter jet canopy. The company is not standing still with the single vehicle either. Local Motors have recently announced plans to release a second car, this time a serious track sports car. Like the Rally Fighter, its design will ultimately come from a submission from the public. The company, in cooperation with Cincinnati Incorporated and Oak ridge National Laboratory has recently built the Strati, the worlds first 3D printed electric car. This was done in front of an admiring audience in 44 hours but was not just a stunt. There is intent by Local Motors to bring the Strati to production. There may be yet, more exciting things coming from this company. Back to the Rally Fighter, as you might imagine from a high price, low volume vehicle such as this the customization options are unsurprising plentiful. But I was surprised to see how dynamic the Rally Fighter configurator actually was.
MORE