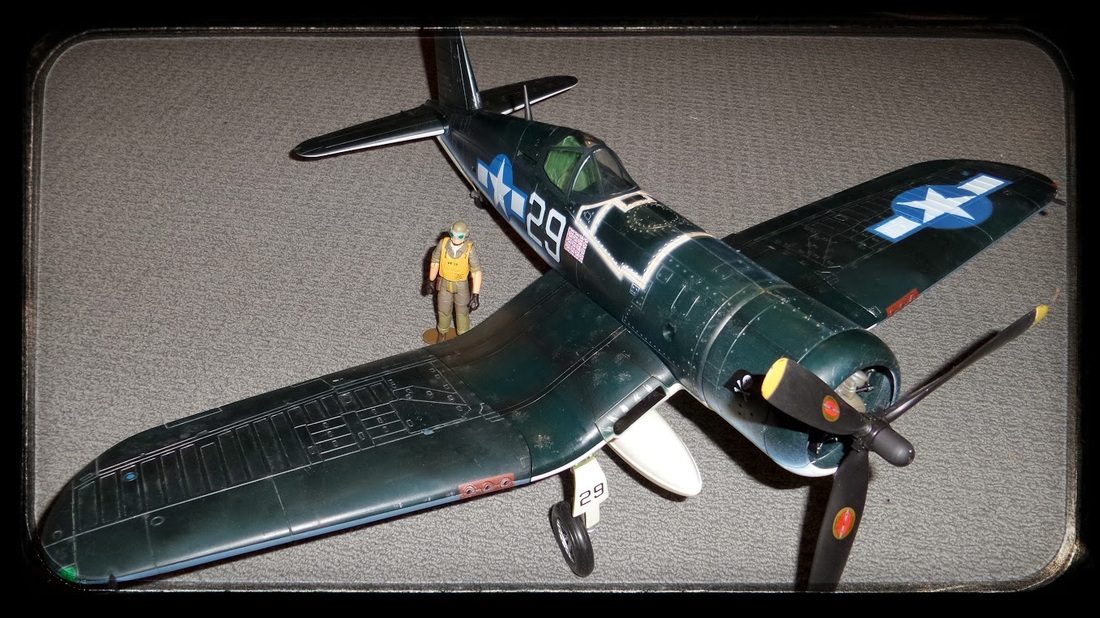 Today, a quick look at a Navy Corsair model made by 21st Century toys as part of their Ultimate Soldier line, in impressive 1/18th scale! This is particular model pays tribute to the fighter plane flown by famous pilot Ira Kepford as part of the Jolly Rogers squadron. The Corsair, also called Vought F4U was an American fighter aircraft that entered service in 1942 and was active primarily in World War II and the Korean War. It was originally designed for aircraft carrier use but proved to be initially problematic and could not be effectively used on carriers until several modifications were implemented later in it's service.

I purchased the Ultimate Soldier Corsair on Ebay and paid around $78.00. Although this seems expensive, I have seen this item selling for up to around $250.00. The box was quite large in spite of the plane being partially dissembled to minimize it as much as possible.

Here you can see the Corsair model just out of the box. A rigid black plastic frame protects the model parts during shipment. 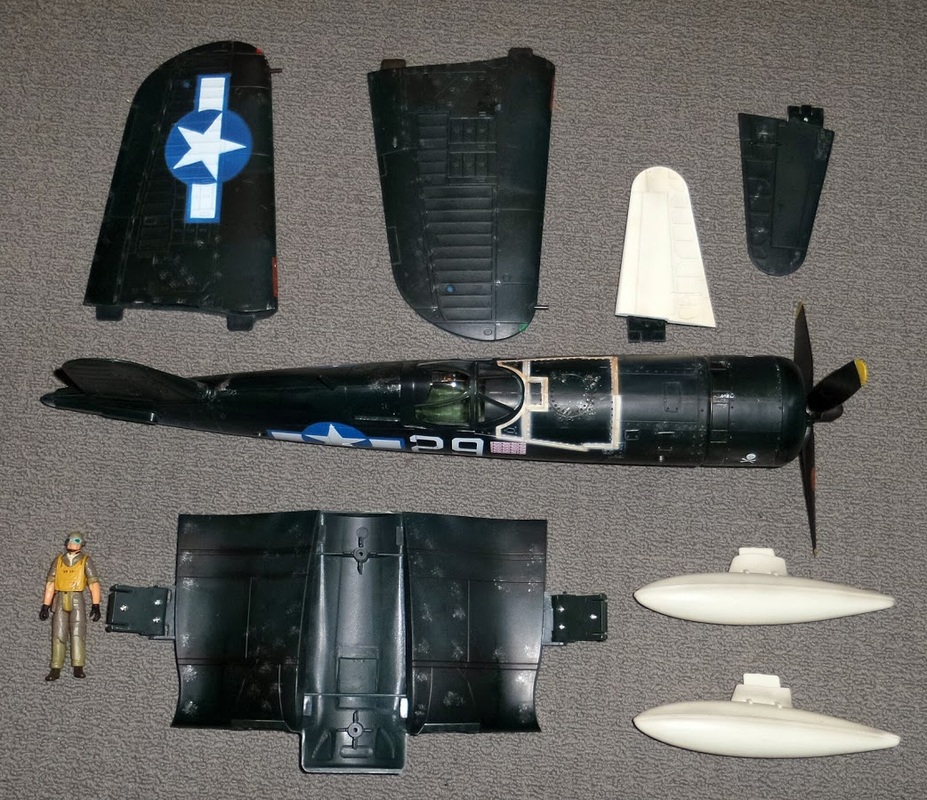 Once the aircraft pieces and the figure were removed, the assembly could begin. The parts were held down by large plastic coated wire tie downs. The building process was simple and consisted of securing the bottom half of the plane with two screws where the wings will be attached. Next, the wings, the horizontal elevators, and the drop tanks can be installed. Aside from the bottom half of the fuselage, which is secured with screws, the rest of the pieces snapped together with varied success. The drop tanks did not seem to want to attach, (I ultimately resorted to Super Glue) while other pieces snapped securely with a satisfying click sound. 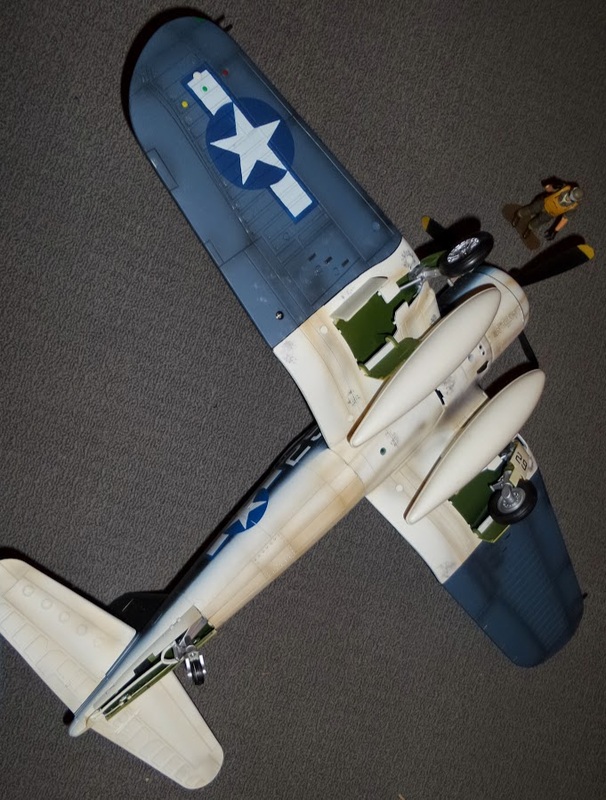 Here we see the white underbelly of the plane. The blue portion of the wings were the part that folded up for storage of the plane in hangars and eventually on aircraft carriers. My best guess is this allowed the plane to remain more inconspicuous when the wings were folded than if the entire wing was a bright white. 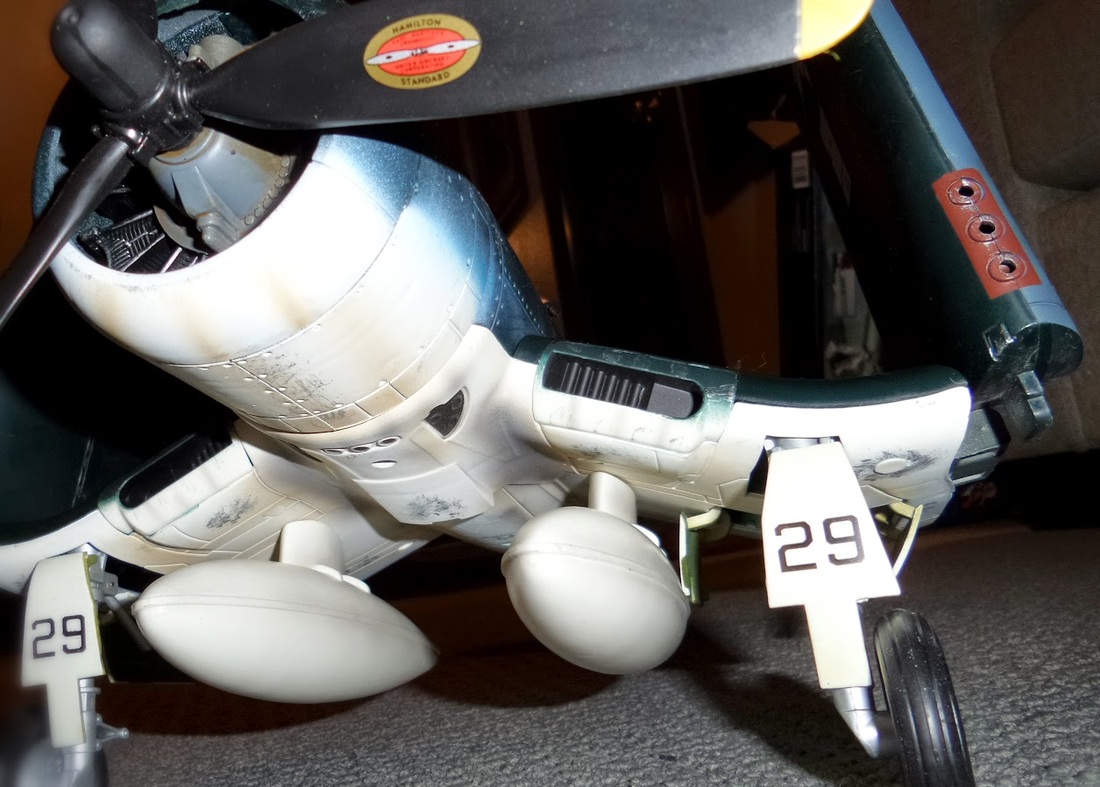 The Corsairs had various paint schemes throughout their lifespan. This one features a three color camouflage palette. The colors consist of "Sea Blue" on the top, "Intermediate Blue" through the middle strata, and "Insignia White" on the underbelly. Luckily the model came out of the box already painted with great care to the historic details. The Corsair looks as if it was hand painted and as if hours of work had it been done by an individual artist. This model even shows subtle "battle" damage. 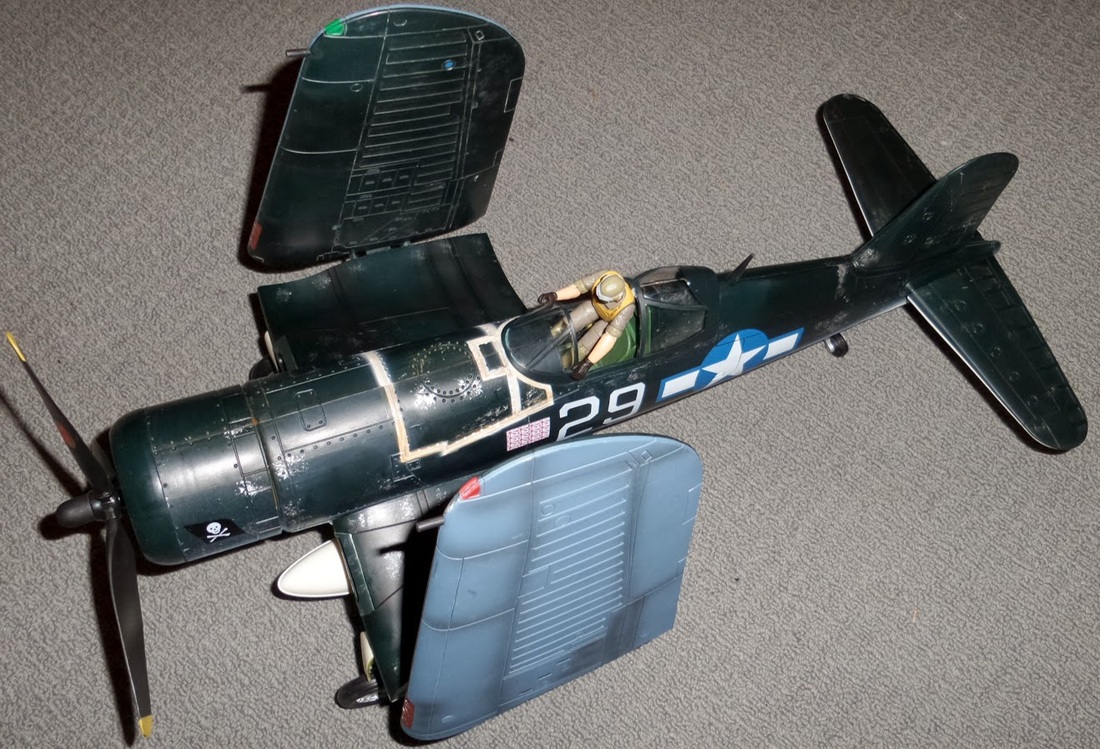 The box states this model is for ages 5 years and up but this certainly is not a toy. The plane is very large about 24" by 24" and not very "playable". Cleverly, there were some elements to the model that were made rubber as not to break easily or hurt someone. Unfortunately, the landing gear was fussy to lower and then when lowered, did not want to stay out, the rear landing gear utilized a plastic prop rod that broke with minimal handling. A child (or adult) might have allot of fun flying the Corsair around their living room with the landing gear all neatly stowed behind smooth body panels, but to pull the landing gear out again is tedious. Eventually I imagine after the novelty has worn off  you will keep it one way or another for display. While overall a sturdy model, there is some flex where the wings attach to the body. Speaking of the wings, the hinge that allows the wings to fold up and down are plastic upon plastic. One of the hinges slightly cracked, it still works (for now) but this occurred after only a few conversion.  It was unfortunate to have these issues with such an expensive model especially just moments after it was assembled and handling it carefully. Part of the problem is there were insufficient instructions combined with clever but tricky mechanics involved in the three landing gears and folding wings that may have caused the two pieces to break. I imagine a more impatient person could do even more damage. Even the cockpit door was initially a riddle to open. Once the cockpit was open you could place the included pilot figure inside. The figure is similar in size and design to a GI Joe figure.  The plane, like GI Joe is supposed 1/18th scale but this plane seemed larger. GI Joe vehicles are probably not scaled as accurately as this premium model is. 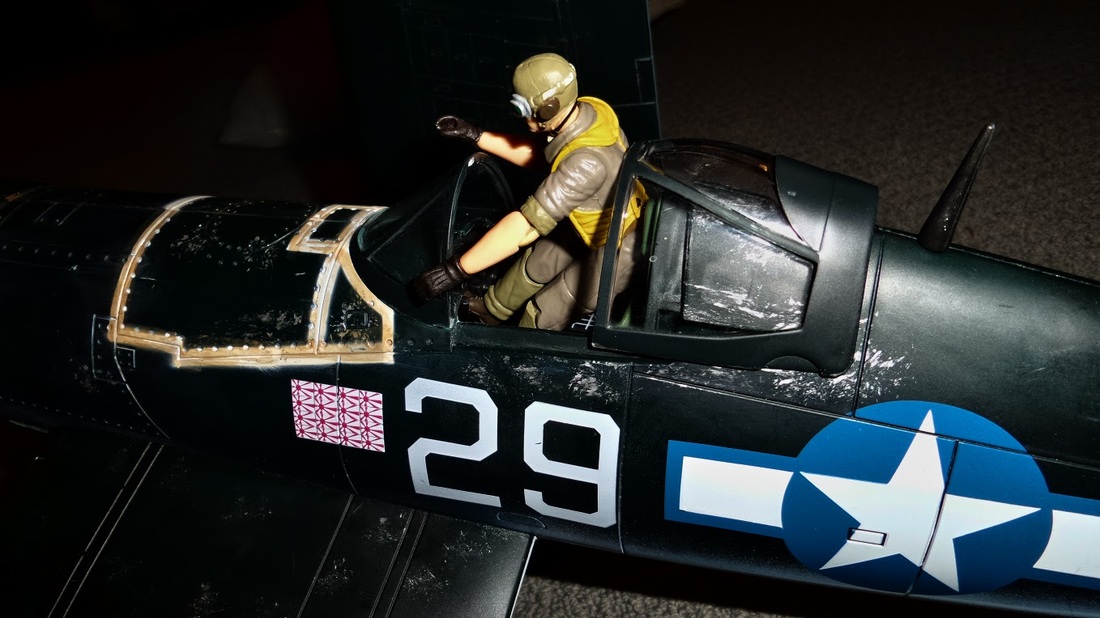 As I mentioned before this model did not seem designed to be played with, it is likely intended for display. The Corsair certainly is a fine display piece.  The only problem there is it is so large the question is how do you display this model? I had a hard time finding any flat surface where it could be placed and kept. It could be hung on a wall with its landing gear down or hung from the ceiling with a line and landing gear up as if in flight. 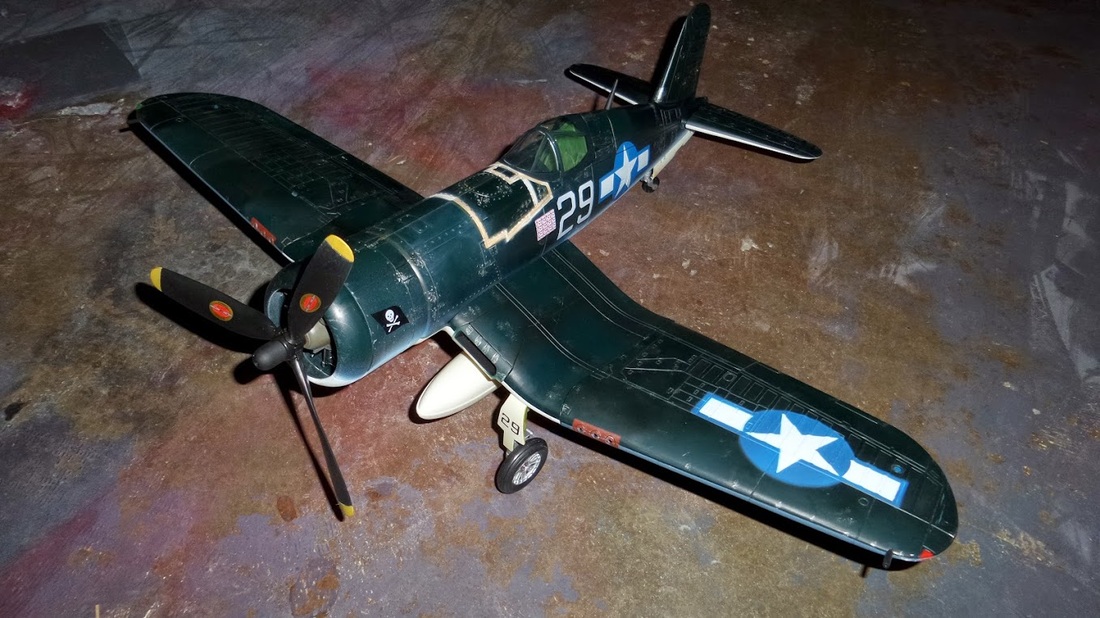 This 1/18 Ultimate Soldier Corsair from 21st Century Toys is a big beautiful model where all the detail work was already done right out of the box. The more I look at it the more I appreciate the actual Corsair design. It is expensive and fussy and not for the timid collector. I can imagine it in a man cave or as restaurant decor. Despite its flaws this model is finely detailed with care to the engineering and historic details of this great classic aircraft.

As a final footnote, may I state that the storage/display problem for this large model was ultimately solved by mounting it on my office wall.
home